Arequipa (Ariqipa (Quechua)) – a magnificent “white city” is located at an altitude of 2325 m in the southwestern part of the Country; between the coastal area of the coastal desert and the spurs of the western Andes. It possesses a series of volcanic cones such as "El Misti", "Chachani", and "Pichu Pichu". This beautiful city is practically completely built out of sillar, a type of white volcanic stone. This is why Arequipa is called the White City (“la ciudad blanca”). It is a magnificent example of colonial architecture. The historic centre of Arequipa was named a UNESCO World Heritage Site in 2000. 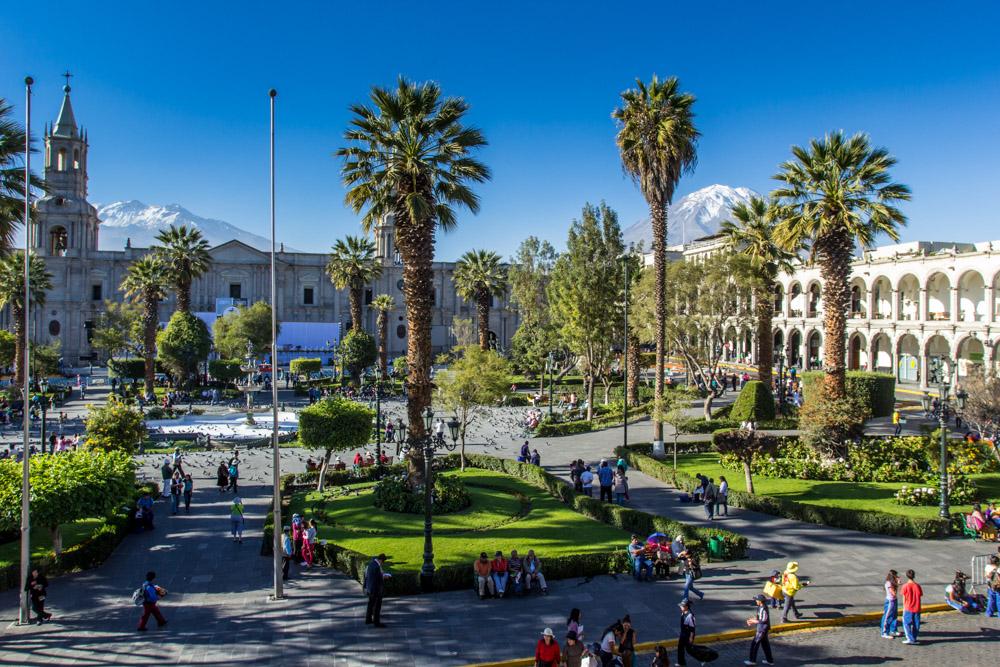 Arequipa is located on the tectonic fracture of the Earth's crust called “Ring of Fire” (“cadena del fuego”), known for its high frequency of volcanic eruptions and earthquakes. The last several strong earthquakes were in 1958, 1960 and 2001.

The modern city of Arequipa was founded on 15 August 1540 by  Pedro Anzures de Campo Redondo. However archaeological excavations indicate that the valley, where Arequipa is located, was already inhabited in the 6th – 7th centuries BC. In the 15th century, when the Incas occupied this territory, Aymara Indians lived here.

The name of the city

There are various opinions about the origin of it's name; said to come from the Quechua or Aymara languages. One tradition says that the Inca Mayta Capac received a petition from his subjects to reach the valley of the Chili. They requested permission to stay in the region, because they were amazed by the beautiful scenery and mild climate. The Inca responded, "Ari qhipay" (in Quechua: "Yes, stay").  Another version was that the name came from an old dialect of Aymara. Ari qquepan (literally, way of war horn). In English the phrase means "trumpet sound". 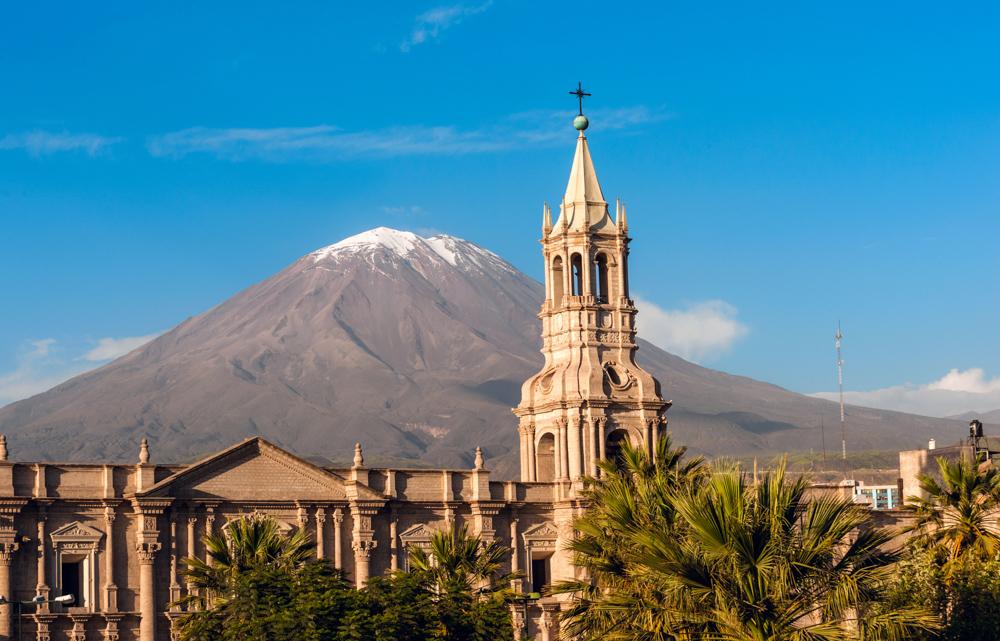 Places to see in Arequipa and its outskirts

There are many interesting museums in Arequipa. These are some of them:

The most significant find displayed in the Museum of Andean Sactuaries is the body of a young girl known as Juanita, the Ice Maiden of Mount Ampato. Juanita was discovered in 1995 at the top of Mount Ampato, when the volcano erupted and melted the glacial peak, exposing the body. The body caused a sensation in the scientific world due to its well-preserved condition by the ice on the volcano – today it is one of the best preserved mummies in the world.

Juanita was wrapped in a brightly-colored burial tapestry. A collection of grave goods: bowls, pins, and figurines made of gold, silver, and shell was found with her in the burial tapestry. Carbon dating indicated that the girl was killed sometime between 1450 and 1480, at approximately 11–15 years old.  It is assumed that the mummy Juanita was a human sacrifice killed as an offering to the Inca gods.

The Museum is open every day. 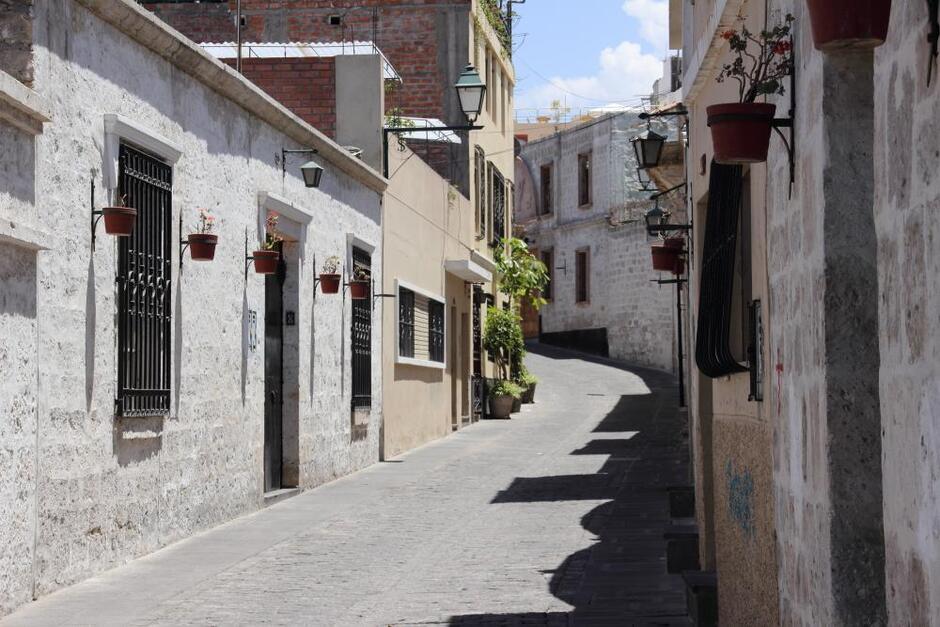 Santa Catalina Monastery was built in 1579/1580. The monastery was expanded over the centuries until it became a city within the city, about 20000 sq./m. It is still functioning as a place of worship. At its peak, the monastery housed 450 nuns and their lay-servants, and was closed off from the city by high walls. There are approximately 20 nuns currently living in the northern corner of the complex.

The interior of the monastery is beautiful, with painted arches and an interesting chapel with baroque frescoes of Inca vegetation, there are lots of flowers and orange trees around. 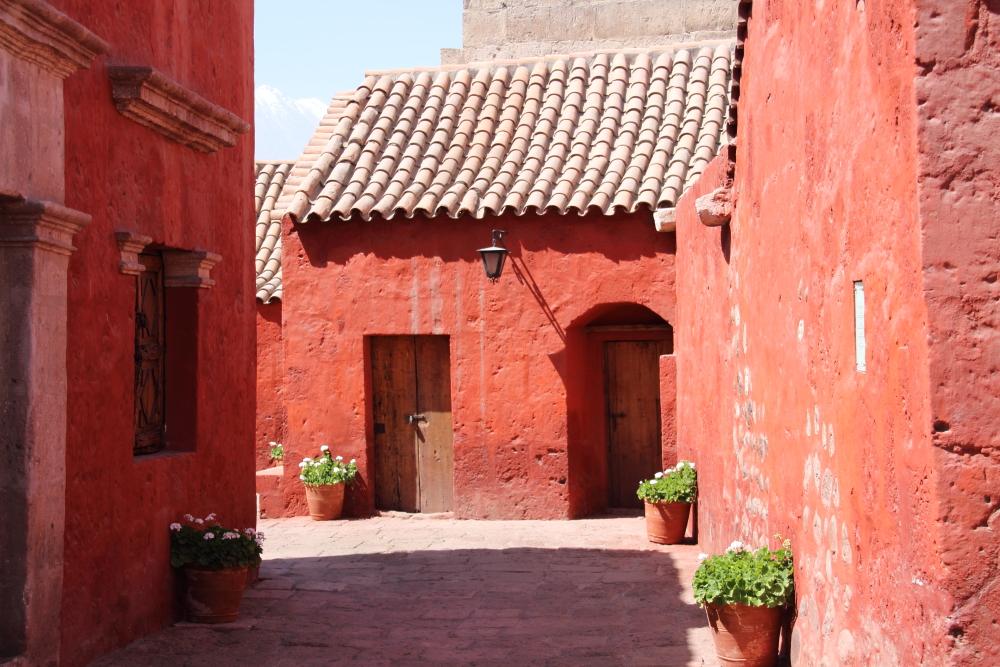 Its doors remained closed to the outside world until 1970. It was a miniature city within the city with its own streets, alleys and squares. There are 100 various rooms, 3 closed galleries, a church and an art gallery (Pinacoteca) in the territory of the monastery. In the closed galleries you can see marvelous frescoes, while the Pinacoteca contains the paintings of the masters of Cusco's School of Art.

There is an interesting story about the Pinacoteca: When the restoration work of the Monastery started, before its opening to the public, a great collection of pictures of mainly religious themes was found inside and samples of Peruvian paintings of the 16th century. About 400 pictures were restored or "refreshed" to their original condition. The work of expert hands has recovered for present day observers a collection of great historic and artistic value. 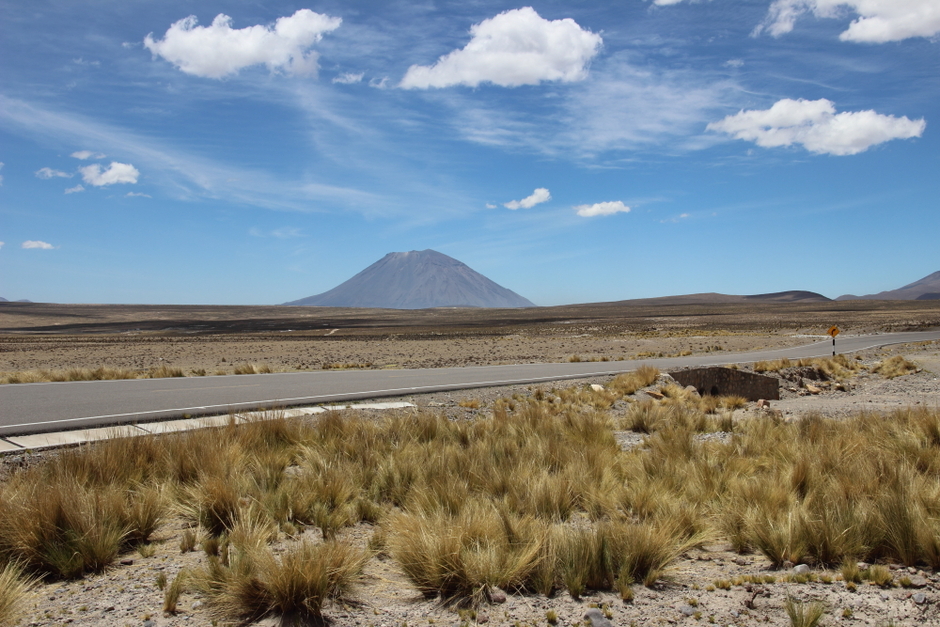 El Misti volcano stands at 5825m and located 17km northeast of Arequipa, visible almost year-round, but especially during winter (April-December). Misti has been active numerous times – 5 weak eruptions have been recorded for last 100 years and its last eruption was in 1985. Six Inca mummies and rare Inca artifacts were found in 1998 during excavations near the inner crater. These findings are currently stored in the Museum of Andean Sactuaries (Museo de Santuarios Andinos) in Arequipa.

They offer climbing tours to the summit of El Misti, which takes 2 days. 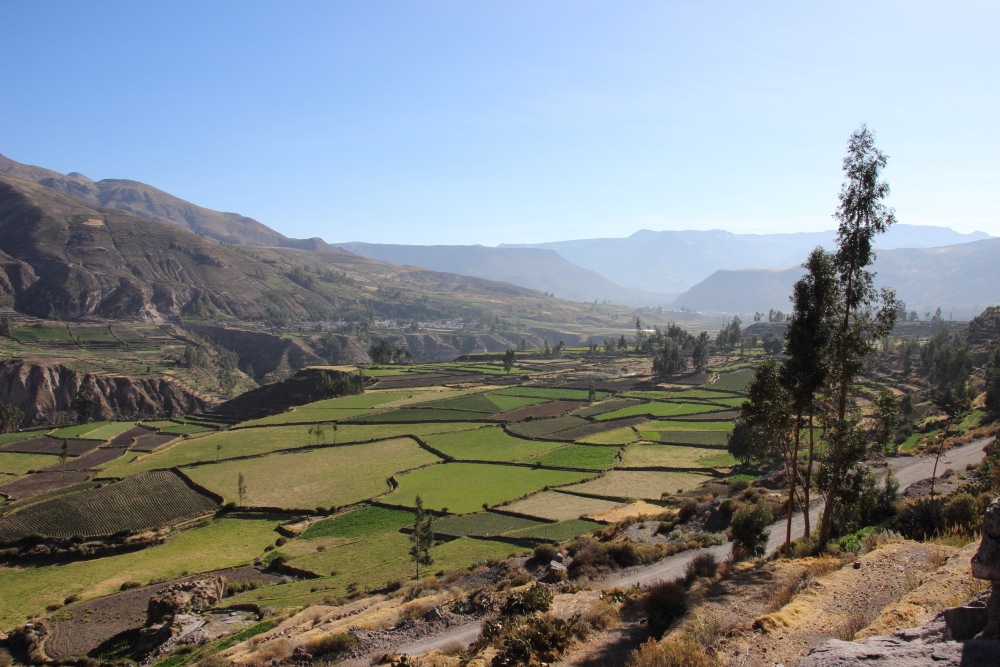 Huanaputina lies in Southern Peru, 80 kilometres of Arequipa. It is infamous for its catastrophic eruption in 19 February, 1600. The 16 day eruption of Huaynaputina volcano in 1600 was the largest historical eruption in South America, and one of the largest in the world in the past 1000 years. The explosion had effects on climate around the Northern Hemisphere, where 1601 was the coldest year in six centuries, leading to a famine in Russia in 1601-1603, turning things worse during the 'Time of Troubles'.

Located 377 km north of Arequipa, over the valley of Andagua River. It is a geologic formation of the Quaternary Age, a beautiful landscape with more than 80 volcanoes all without activity, with geothermal activity. The arid and desert landscape in the high part of the valley looks like a lunar landscape. Toro Muerto (English: Dead Bull) is an ancient petroglyph field 167km northwest of Arequipa spread out over 5 sq./km and considered the largest of its kind in the world with over 3000 volcanic rock carvings dating to the Huari Culture  (Wari, 9th – 12th centuries AD). The majority of them are representation of plants, animals and humanlike image of the gods – everything that was important for Huari people.

This canyon is reportedly one of the deepest in the world, reaching a depth of 4,160 meters. It is located about 160 kilometres northwest of Arequipa. The Canyon is ideal for adventure sports such as hiking, climbing, rafting, mountain biking. Besides, you can see the condors soaring above the abyss!

More details about Colca Canyon and how to get there. 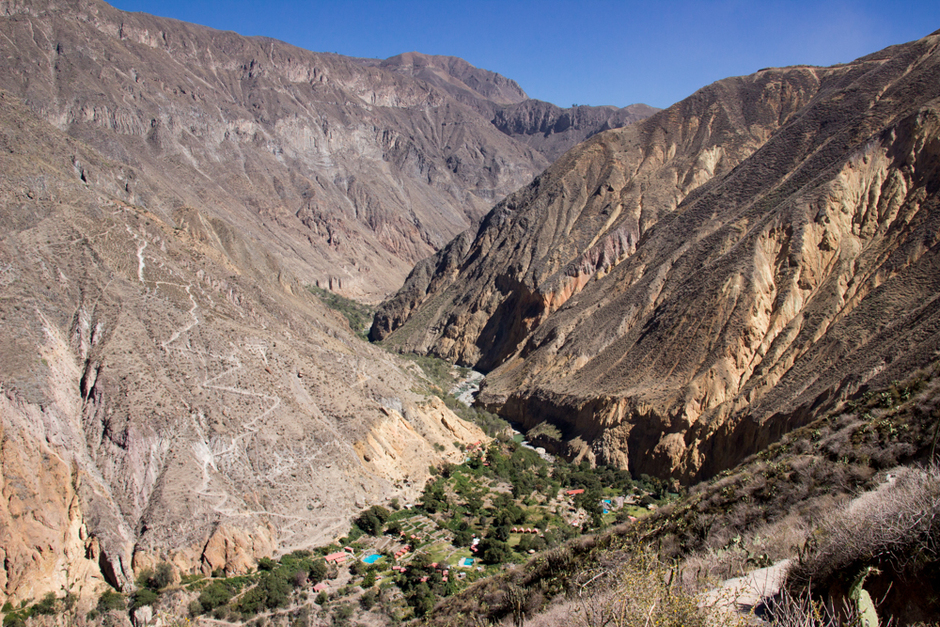 Cotahuasi Canyon located a bit further about 400 km of Arequipa is also one of the deepest canyon in the world. Its maximum depth is 3535 meters in the vicinity of Ninancocha. Most parts of the canyon is a conservation area. Here you can see many wonders: a mysterious “stone forest” (Santo Santo) formed by rain and wind erosion, these strange figures are spread over an area of 5 square kilometers; pre-Incan andenes (terraces dug into the slopes of mountains by the ancient Peruvians, to produce cultivable hillsides); the “forest of gigantic cacti”, which are some strange species of cactus that reach up to 13 meters high; and the magnificent Puya Raimondii.

What is the best time to visit?

Arequipa has an average annual temperature of 20° during the day and 5-10° at nights, therefore you can travel any time.

How to get there?

Arequipa is located at 1010km from Lima and 521 km from Cusco. The flight from Cusco or Lima takes about an hour.

Bus trip will take about 16 hrs if you travel from Lima and 12 hrs – from Cusco.