Home / Peru / Points of interest / The Moche Route and Trujillo

The Coast was home to many ancient civilizations: Chavín, Cupisnique, Paracas, Nazca, Moche, Chimú and many others. Some of them left amazing temples, palace complexes, impressive items of ceramics, textile and ornaments. Moche Route is a tour to visit the most important archaeological sites of Pre-Incan civilizations Moche (Mochica) (I-VIII AD) and Chimú (X-XV AD). Main temples, palaces and museums of these civilizations are located near Trujillo, which is 600km (373 miles) north of Lima. The most important sites of these civilisations are located near this city: Huaca de la Luna (Temple of the Moon), Huaca del Sol (Pyramid of the Sun), El Brujo (archaeological complex), Chán Chán. Another important site of Moche culture can be found at the Museum of the Royal Tombs of Sipán (Museo Tumbes Reales de Sipán), which is located 35 km (22 miles) from Chiclayo. This is a new route, excavations and researches started comparatively recently, only about 20 years ago.

At present Peru’s government is taking measures to develop Moche Route by investing money for the excavation of temples, building of museums and developing infrastructure. This route will be really interesting for those interested in Indian cultures. 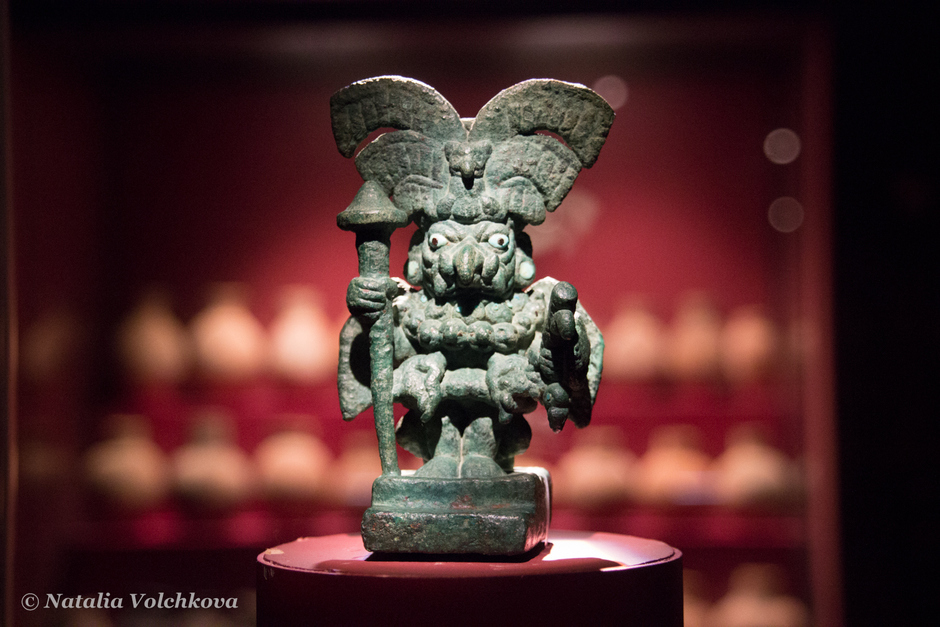 Long before the Incans, Peru's North Coast supported civilizations known today as the Moche and the Chimú: Moche flourished in northern Peru from about 100 AD to 800 AD, while Chimú lived here in 900 to 1400 AD. Some scholars think that climatic events, possibly a super El Niño could have disrupted the Moche way of life. And the Chimú civilization was ended by the Incas, who conquered and joined this nation to the Incan Empire. The Moche and the Chimú were very advanced civilizations. They built beautiful cities, erected magnificent temples, created impressive ceramic artefacts reflecting their surroundings.

Huaca del Sol, or the Pyramid of the Sun is not yet ready for public viewing as excavations are still ongoing. Huaca de la Luna, or the Temple of the Moon is the only one you can actually tour. Both buildings belong to Moche culture. The Temple of the Moon is built up against the lower slopes of the Cerro Blanco, the White Mountain and is a very interesting monument comprised of 5 overlapping temples. They are built in different periods and in order to see the earlier temple, the later temple must be dismantled. The temple was completely covered with frescos, which are still visible in most places. Restorers carefully clean frescos from mud and dirt.

There is a museum near the temple exhibiting Moche ceramics and ornaments. The artifacts of Moche culture are really a wonderful fine work.

Entrance fee for the temple and museum is 11 Soles (4 USD), including a guided tour in English or Spanish. 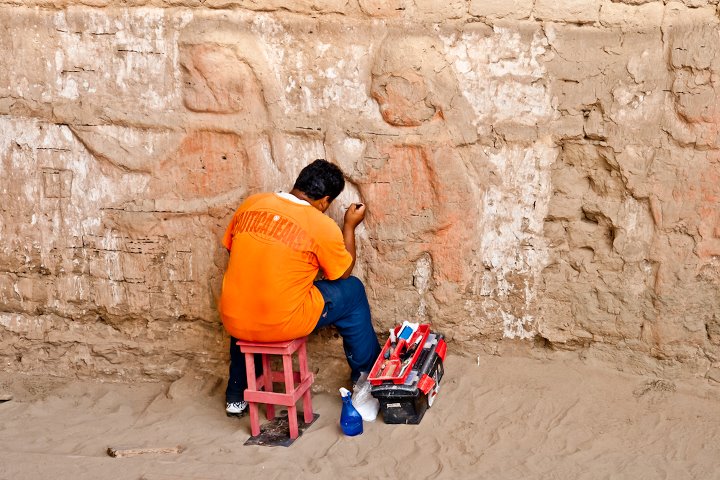 Chán-Chán is a city built by the Chimú civilization (900 AD – 1400 AD). The sprawling adobe-brick capital city has been called the largest mud city in the world. At present the size of the city is 14 sq./km (5.4 sq. miles). At one time, it held ten royal compounds. It is all that remains from the 20 sq./km (8 sq. miles) covered by Chán-Chán in ancient times.

Archaeological works are still ongoing in most parts of the city, but Tschudi palace also known as Nik An is open to the public. Walls, some over 10 meters (32 feet) tall, and 1500m (4921 feet) long enclose Nik An. This is a large territory with outlying quarters which housed king’s escorts and servants, and numerous ritual platforms, altars and warehouses. At present the city has a sandy colour, but when it was in use, it was just like the Temple of the Moon covered with colourful paintings. You still can see the remnants of these frescoes.

An astonishing scene is when you come up to the reedy ponds while walking in the enormous city located in the middle of the desert and sands. It is totally unexpected and very impressive! It is believed that these ponds were used for cultivation of Totora reeds, as well as during the religious ceremonies dedicated to the Moon. In total, there are 140 such ponds in the territory of Chán-Chán.

A ticket covering the entrance fees for Chan Chán costs 11 Soles (US$4), but the services of the guide must be paid separately. This ticket also covers the tours in the site museum, as well as the Temple of Rainbow and Huaca La Esmeralda (Temple of Emeralds). 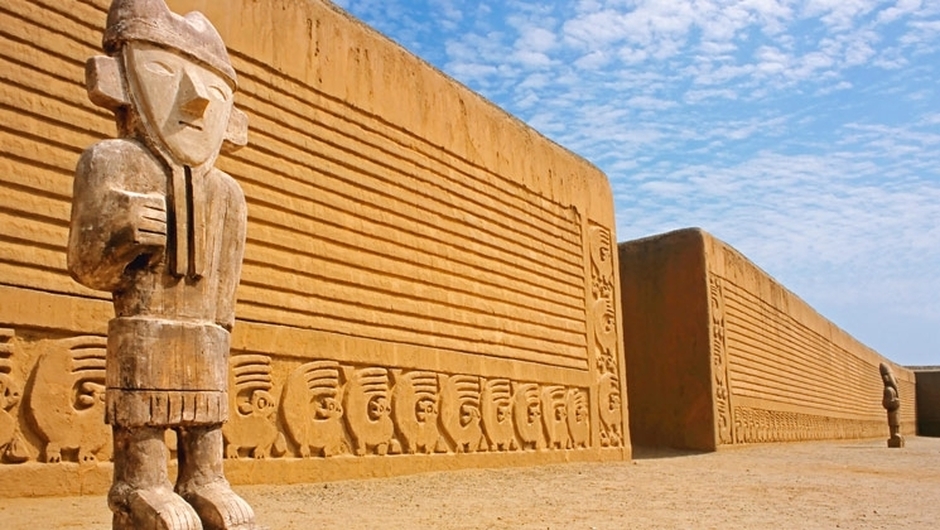 The archaeological site is located 60 Km (37 miles) from Trujillo, in the Chicama Valley (1 hour and 15 minutes by car), among many kilometres of sugar cane. El Brujo is formed by the three following constructions: Huaca Prieta, Huaca Cao and Huaca Cortada. The Huaca Prieta is the oldest – it was built in 2500 B.C. It is not uncovered completely; therefore it is closed to the public. But you need to visit Huaca Cao Viejo and site museum.

Huaca Cao Viejo was built by the Moche culture, about 200 A.D. and was abandoned in 650 A.D. Huaca Cao Viejo was not restored and all walls and frescoes are in the original state. The architecture is similar to Huaca de la Luna, there are four superposed temples, one built over the other. 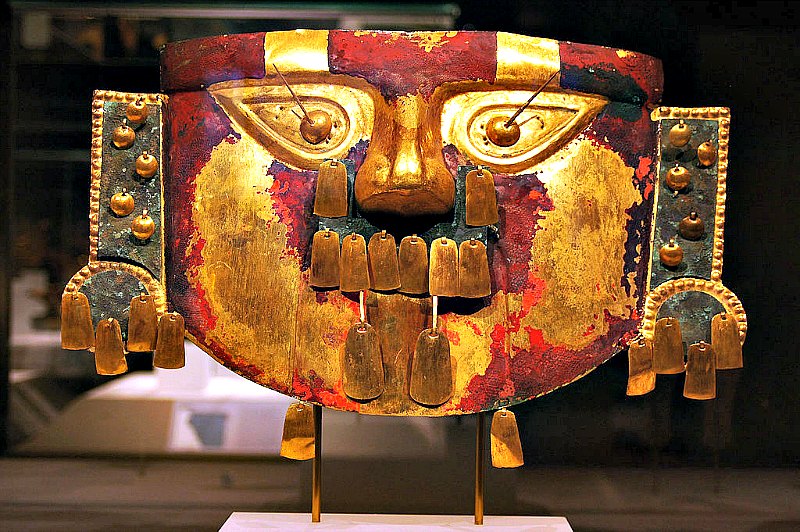 The most interesting is the grave recently discovered in El Brujo. Called la Señora de Cao, she is thought to have been dressed in the role of the Priestess and lived in 350 BC. This mummy was also an intact funerary context and an incredibly preserved body;  it is kept in the museum at the Temple. It has astonishingly well preserved skin on the bones of the mummy – all tattoos covering the body of Señora are clearly visible.

This was a very young woman: she died at about 20-25. But the presence of gold jewellery and other fine items indicates the mummy was that of an important person. It was the first evidence of women rulers in pre-Hispanic Peru, which was unusual for the Moche culture. It is still unknown how this small girl (only 145 cm (4.7 feet)) could come to power.

Very few tourists make he journey to this place. If you decide to visit the archaeological site you may be lucky enough to be able to look around the Temple and the Museum alone, as if it’s open only for you. 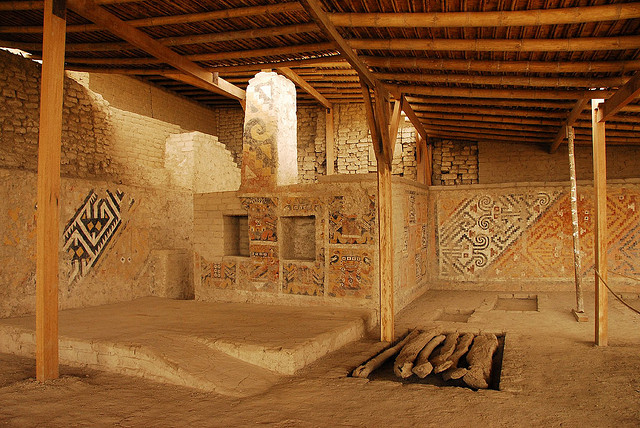 The Tomb of Sipan is close to the Town of Sipan, 35 kilometres (22 miles) from Chiclayo (3 hrs by bus from Trujillo).

The story of discovery is very interesting: as always looters were the first who understood that there could be treasure under the adobe platform. When police arrested one of the looters with a wonderful golden mask incrusted with precious stones, the Peruvian government organised an archaeological expedition. Subsequent excavations did yield the remains of the Lord of Sipán, a royal warrior and a priest. The tomb was full of utensils, ornaments and symbols of power. This tomb was significantly different than the burials of less noble people. Below the tomb of the Lord of Sipan, two other tombs were found, that of a priest and of the Old Lord of Sipan (about 50 A.D.). DNA analysis of remains of the Old Lord of Sipán proved that he was a direct ancestor of the Lord of Sipán. 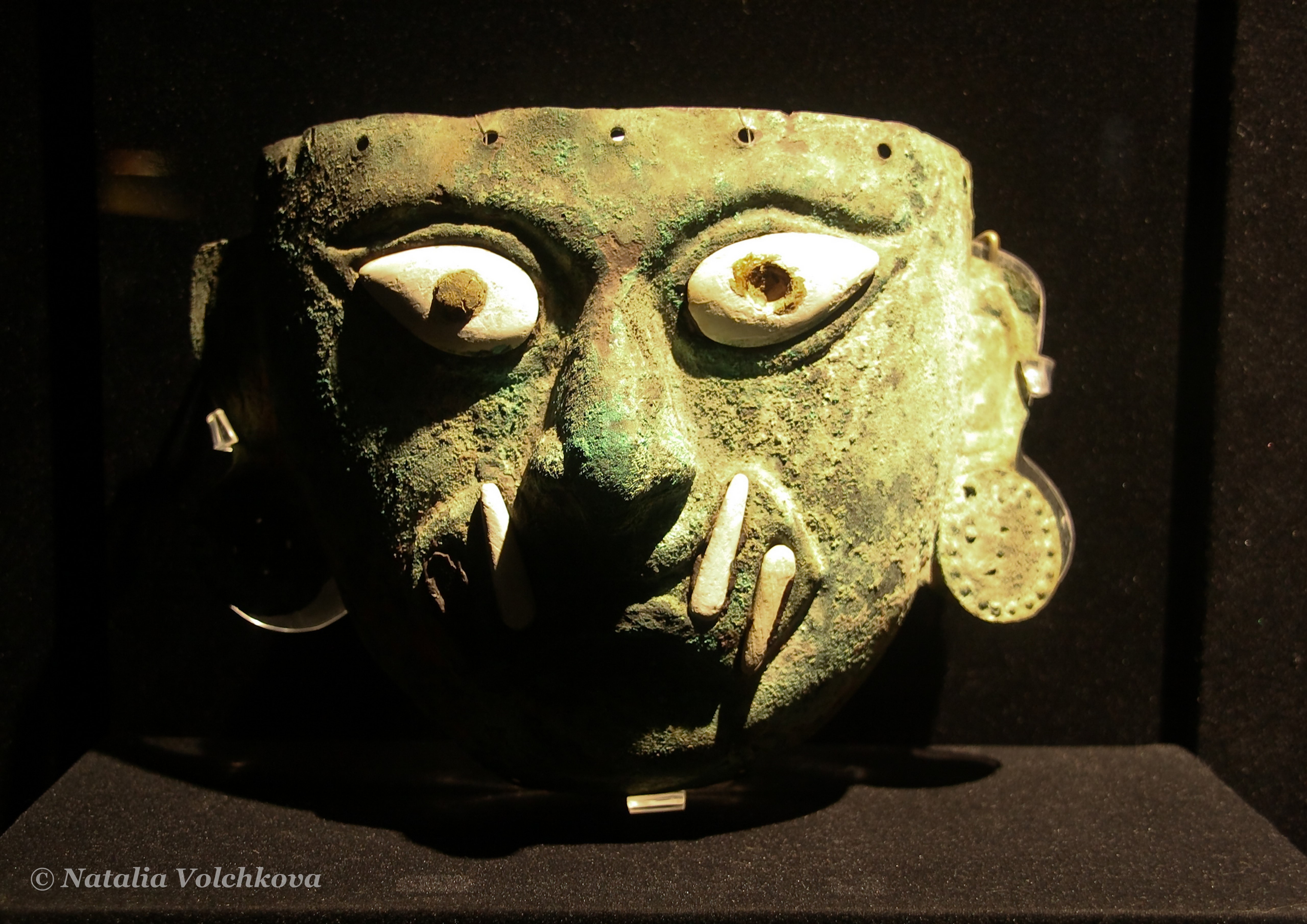 The Royal Tombs Museum of Sipán houses most of the important artefacts found in the tomb which tell us the history of Lord of Sipán. 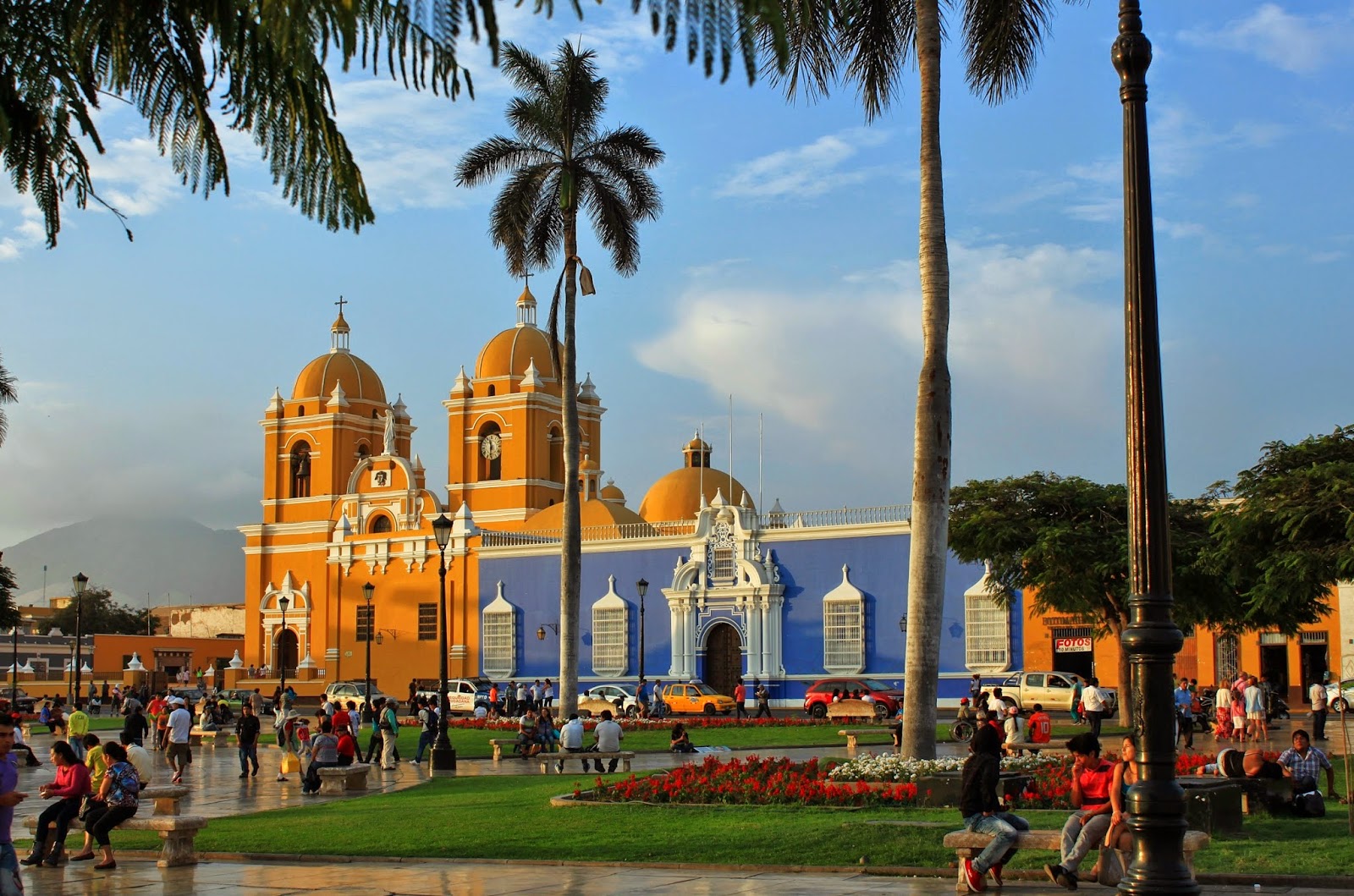 This museum will inform you about all civilizations that lived along the coastal area from 10,000 B.C. till the continent was conquered by Spanish in 1552. 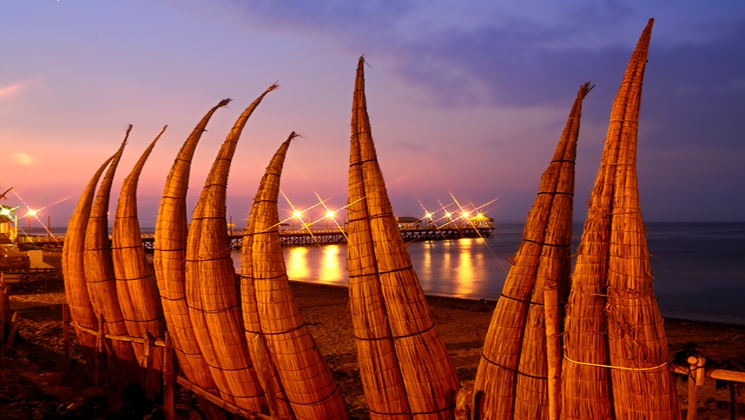 This museum contains the collection of archaeological and documentary discoveries from the Chicama Valley. 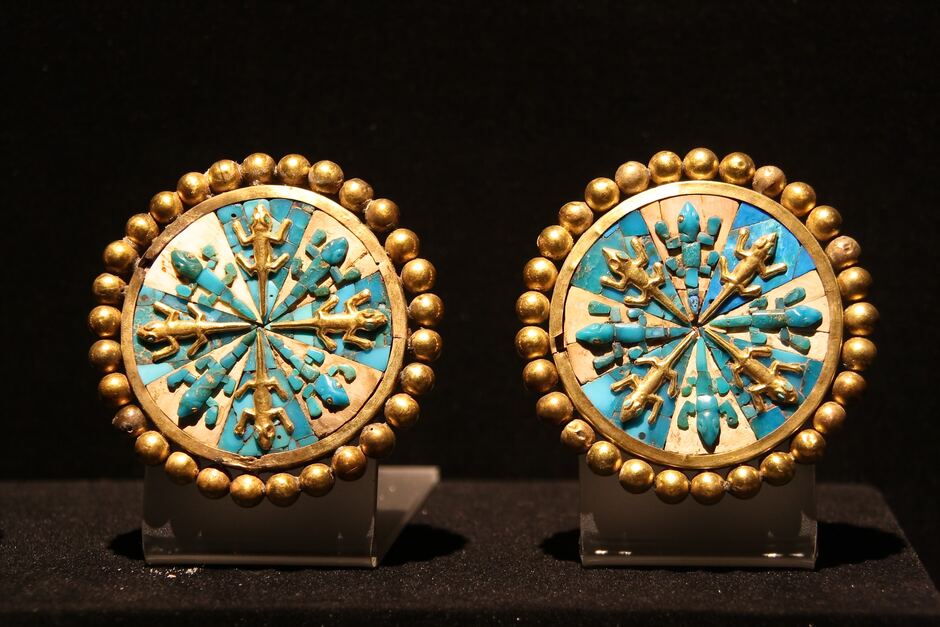 You can travel from Lima to Trujillo either by plane (1 hr) or by bus (8 hrs). Cruz del Sur travel agency provides nice and comfortable buses till Trujillo, although there are cheaper, but less comfortable alternatives.